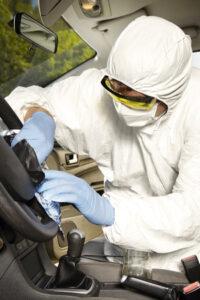 If you’ve ever been to a public auto auction in the past, you may have seen vehicles listed as “biohazards” selling for rock-bottom prices to savvy buyers. But what constitutes a biohazard, and is a great price on a used car really worth the associated risk?

In some cases—such as those where a murder or suicide took place in the vehicle—the cause of the biohazard designation might be immediately obvious and quite worrisome. But biohazard vehicles can be marked as such for more innocuous reasons, too. The former owner may have gotten a severe nosebleed while driving, for example, or a young child may have urinated in the back seat.

If you’re able to confirm the cause of the biohazard designation, it could constitute an opportunity to purchase a reliable vehicle at an unbeatable price.

All you need to do is have the vehicle decontaminated by a company that specializes in biohazard remediation such as Anubis SceneClean. In fact, we are the only company in our area that employs an ASE-certified mechanic for biohazard cleanups in vehicles.

We can take the affected vehicle to our site and clean it thoroughly to eliminate any potential health risks, unsightly stains and unpleasant odors associated with the biohazard. We’ll clean whatever we can, replace any parts that cannot be decontaminated and put the whole vehicle back together again so it’s as good as new.

To learn more about the auto cleanup services we offer at Anubis SceneClean, feel free to give us a call or contact us online today!