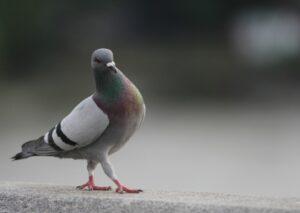 Humans aren’t the only residents of densely-populated urban areas. You can often find a variety of small animals coexisting with humans in cities, too. Pigeons, for example, are common sights in cities all over the world. Although these animals typically pose no threat to humans, their droppings can carry infectious diseases that do constitute serious health hazards.

Foremost among these diseases is a fungal infection called histoplasmosis.

The fungus that causes histoplasmosis can be found in bird and bat droppings, as well as in soil that has been contaminated by their droppings. When the droppings are disturbed, the fungal spores become airborne and can be inhaled into the lungs. While many people who are exposed to these spores never exhibit symptoms of histoplasmosis, they can cause life-threatening infections in people with compromised immune systems.

The symptoms of histoplasmosis—which include fever, headache, muscle aches, chills and chest discomfort—generally appear within three to 17 days of exposure. In severe cases of histoplasmosis, the infection can spread to other parts of the body such as the liver, adrenal glands and central nervous system. When left untreated, these cases are usually fatal.

If you purchase a property that’s been contaminated with bird or bat droppings, it’s always a good idea to have the problem remediated by a professional cleaning company. At Anubis Scene Clean, our biohazard cleanup team can thoroughly and safely decontaminate the affected area to prevent the spread of infectious diseases such as histoplasmosis.

Give us a call or contact us online to schedule your cleaning appointment today!