A Brief History of the Iconic Biohazard Symbol 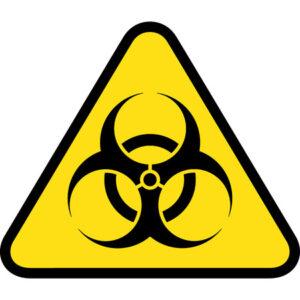 Did you know that the now instantly-recognizable biohazard symbol has only been around since 1966?

For many years, scientists who worked with dangerous biological materials did not use any standard warning label. Rather, labels varied wildly from one lab to the next. Workers at Dow Chemical became concerned that laboratory personnel would become accidentally infected as a result of not recognizing one of the many biological hazard symbols in use.

In 1966, scientists Charles L. Baldwin, of Dow Chemical, and Robert S. Runkle, of the National Institutes of Health, published a paper in “Science” calling for a universal biological hazard, or biohazard, symbol.

A team of engineers and designers used some outside-the-box thinking to develop the new symbol, which we still use today. Rather than trying to represent biological threats in an abstract way, they designed a symbol that would be completely devoid of any obvious meaning, then crowd-tested it to make sure it didn’t carry any unwanted associations. According to Charles Baldwin, an environmental-health engineer working on the project, the team wanted something “memorable but meaningless.”

Why? Well, biohazards are frequently odorless, tasteless and invisible, making them hard to symbolize in any tangible way. What’s more, the symbol is effective because it’s not associated with anything else. When people see it, they know beyond a doubt that it refers to dangerous biological material.

At Anubis SceneClean, the biohazard symbol is one we know well. We’re experienced professionals specializing in biohazard cleanups from crime and death scenes. If you’re in the Dallas/Fort Worth area, give us a call or contact us online to schedule your free cleaning estimate today.